President Jessome speaks on the strength of women 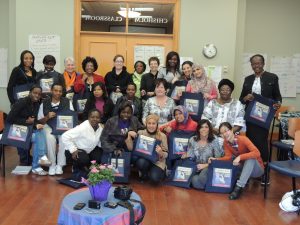 On Wednesday, May 15th, President Joan Jessome was warmly welcomed into a classroom at St. Francis Xavier’s Coady Institute. She was invited to speak to a diverse group of women currently studying at the school – they were from different parts of Canada, Ghana, Indonesia, Nigeria, Egypt, Kenya, Zimbabwe, Bangladesh, Ethiopia, Jamaica, Cameroon, Zambia and Afghanistan.

They invited Joan in to speak about her experience as a woman in a leadership role. Joan recalled her personal and professional journey with the NSGEU: starting out as a young, struggling mother of three daughters, she was eventually hired on as a government employee. From there, a coworker encouraged her to get involved with her union, and a few years later, she found herself on NSGEU’s Executive. Today, she is the longest-serving President of the province’s largest public sector union, representing 30,000 women and men delivering our invaluable public services.

“I got tired of people making decisions for me and impacting my life,” she explained to the group.

Joan also talked about her struggles to balance her work and personal life, putting in long hours for the union on a regular basis. But at the end of the day, “I get to do something I believe in, and not too many people can say that!”

Throughout the discussion, the women discovered that, despite geographical and cultural distances, they held much in common with one another as women in leadership roles.

At the end of the session, Emily Sikawze presented Joan with a traditional wrap and poem about the strength of women.