Tell the Premier you care! childwelfareonthebrink.org 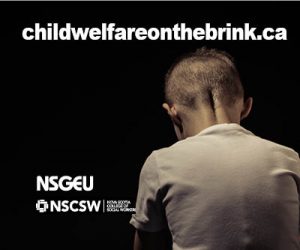 Halifax – The Nova Scotia Government & General Employees Union (NSGEU) and the Nova Scotia College of Social Workers (NSCSW) have launched a campaign encouraging Nova Scotians to visit www.childwelfareonthebrink.org and send a letter asking the Premier for an increase in funding for social programs including Child Welfare in his next budget.

“We are speaking out together because our members are worried about the risk to families, children and youth right now in Nova Scotia,” says Jason MacLean, President of the NSGEU.

The NSGEU represents social workers in the Department of Community Services and in Health Care.

“We have been communicating with the government for years about the crisis in Child Welfare and although some efforts have been made, our child welfare system is in desperate need of support now,” says MacLean.

“Nova Scotia Social Workers, and Child Welfare social workers particularly, are drowning under their caseloads, a lack of administrative support, and lack of community resources for their clients,” says Alec Stratford, Executive Director of the NSCSW.

Social workers have also been feeling the pressure of increased legislative responsibilities without any additional resources. In 2017 government made over 80 amendments to the Family Services Act, including expanding the definition of a child in need of protective services to include youth 16-19 years of age, and tightening court timelines.

“Child Welfare Social Workers are on the front line coordinating social services and ensuring that children are protected from harm, abuse, and neglect,” says Stratford.

“It is an important job that needs to be resourced properly and I urge the government to provide more support for social programs and for social workers so they can do the necessary work to help families, youth and children.”

The NSCSW represents 1,927 social workers in the province.

The NSGEU represents approximately 460 social workers working in the Department of Community Services.